Pamukkale is one of those under-the-radar destinations that isn’t always top of the must-see list. A quick Google search will show you photos of the hot springs, but the search results don’t make it immediately evident that there is a UNESCO World Heritage site (Turkey has 15!) mere steps from the bathing pools.

Before we look at the historical site, let’s set a little context around the geology that attracts holiday-goers. Not far from Pamukkale, the white springs, there are the red springs of Karahayıt. In this neighbor to the north, we find other known, albeit less-frequented, hot springs. Although smaller in size, Karahayıt seems to vie for your attention with its “red water.” Red Water, as it’s also called, draws its name from the rust-colored mineral deposits that build up from iron and calcium in the water.

Why visit? Beneath these waters is a soft mud that, when rubbed on your face, makes you look 10 years younger (or so I’m told). Could this be a fountain of youth?

A short drive away are the more popular Pamukkale hot springs. With reputedly restorative waters, this is the sight rewarded to those who holiday here.

Aptly named “Cotton Castle” for the white icing and the white travertines that cover its mountainside, Pamukkale is the effect of calcium carbonate escaping water. Carbon dioxide is released from the flowing springs matching CO2 levels to that of the surrounding air, and the resulting jelly is what hardens into the travertines that Pamukkale is famous for. 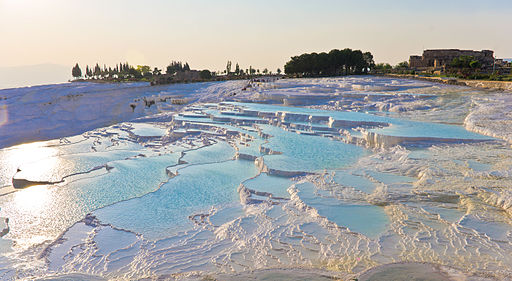 Above and along the Cotton Castle is the ancient city of Hierapolis Örenyeri…or rather, its ruins. Commonly shortened to Hierapolis or just “Pamukkale,” this archaeological site (still undergoing excavation and conservation) is where many wealthy Phrygians once came to retire. The hot springs were reputed for their healing powers as far back as 2 BC; this is what attracted individuals with financial resources to build rest houses here, and what ultimately gave rise to the city of Hierapolis.

This historical city of central Anatolia, built by the kings of Pergamon, was named for the Amazon Queen Hiera – wife of Telephus, mythical Greek king and legendary founder of Pergamon. Personally, I find the ruins to be the great attraction here. But if you prefer to relax in the springs, well…I can’t blame you! If you’re interested in the ruins, let’s head through the south gate (the north gate is under excavation).

Originally excavated in 1887 by the Germans, the excavation is now a joint effort led by the Italians. Perhaps not coincidentally, most of the ruins are from the Roman period, during which time Hierapolis flourished. Here’s an example of the city’s preserved architecture: the amphitheater.

This amphitheater holds 10,000 people; it was the third largest in the world during its time (long before the Colosseo was built in Rome). Walking down and across the steps, as close as you can get to the stage, you suddenly hear an ezan, one of the five-times-daily calls to prayers, and it feels like you’re on a movie set.

Unlike later amphitheater constructions (such as the Roman Colosseo), this stadium has a flat wall behind the stage – intentionally constructed to lean against the mountain slope. Perhaps not an originally intended construction is the vast necropolis behind the forest. It was the largest necropolis in ancient times because, if you remember, the old and terminally ill came to Pamukkale for its presumedly healing hot springs.

You can’t see the necropolis from here, but it’s just beyond that tree line. You can, however, spot a small enclosure in the distance, swathed in black tarp, just before the edge of the forest. Do you see it?

Behind that archaeological veil is the church and tomb of Saint Phillip – yes, that Saint Phillip, of Christian renown. In fact, in archaeological literature, Hierapolis is called a holy city because of its many temples and other religious buildings.

Here’s an idea: since much of this ancient city is closed off due to archaeological research, let’s check out the aerial views. Are you up for a spontaneous adventure? We’re in luck: even without advanced planning, we can paraglide over Pamukkale’s white cliffs.

The calcium deposits could easily be mistaken for snow, don’t you think?

Many Germans and Russians are well-acquainted with Pamukkale, and it’s time the rest of the world learned about it too. Here’s to the Cotton Castle and its archaeological treasures; may they not be forgotten like the myths of Telephus and Hiera.