Ephesus: The Temple of Artemis & The House of Mary

Fun Fact: Did you know the Turkish province of Izmir was home to Homer (of Iliad and Odyssey fame)? Actually, many cities have claimed Homer’s citizenship, but evidence favors Smyrna – what we now refer to as Izmir. This singular region gave rise to St. Paul, St. John (the Apostle, not John the Baptist), and the Virgin Mary. But more on Biblical references later.

Also in Izmir, specifically in Ephesus, we find one of the seven wonders of the ancient world (or, at least, some semblance of it): The Temple of Artemis. Although it hasn’t fared as well as the Great Pyramid of Giza, the only ancient wonder that remains relatively intact, at least something of it remains to be seen.

Are you familiar with the ancient wonders, by chance? The Lighthouse of Alexandria…flattened in an earthquake. The Statue of Zeus at Olympia…burned, then flattened in an earthquake; today we rely on texts to describe the gold and ivory wonder that was a 40-foot tall homage to the ruler of the Greek pantheon. The Hanging Gardens of Babylon…there’s a debate whether or not they actually even existed. The Temple of Artemis at Ephesus –also demolished by fire and earthquake– might not be a great display of the once-great wonder of the world, but at least its existence and location have been validated after being excavated from beneath a swamp. So what’s left of the wonder? Gosh, it does make one wonder!

If you’re struggling to envision the original structure based on a collection of submerged stones and a single erect column (I am too), here are a few conceptualizations of what the temple might have looked like in its glory days. 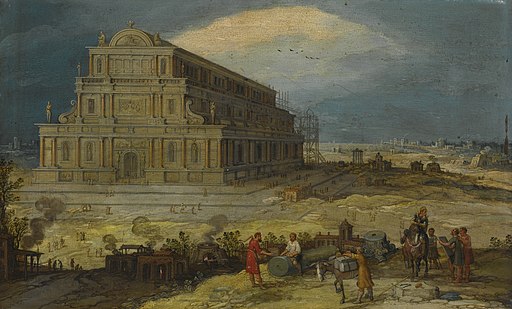 In the photo below, we have an intersection of three religions…somewhat representative of Turkey in general. There’s a temple for Artemis, the Greek goddess; in the background on the hill is a Muslim mosque; atop the hill is a Christian church, the Basilica of St. John (for St. John the Apostle, who is believed to have brought the Virgin Mary to this region, where they lived in exile).

Ephesus is abundantly full of history. Aside from The temple and the basilica, there is also the ancient city of Ephesus (an archaeological site that’s definitely worth visiting) and the house that the Virgin Mary was believed to have hidden in (and spent her final days).

Since we’re talking about Biblical figures, have you ever heard “a reading from the Letter of Saint Paul to the Ephesians”? In case you’re curious, Paul lived not too far away – he was a carpet-maker in the agora of Hierapolis in nearby Pamukkale, where his tomb and chapel sit.

But back to Mary. Speaking of whom…are you seeing a pattern here? Artemis, the Amazons (Artemis was the patron goddess of the warrior women, and they supposedly settled in Ephesus and neighboring Hierapolis), Mary. It seems that Esef, as the city is locally called, has a history of strong, admirable women who were venerable role models in a male-dominant society. (+10 points to ancient Ephesus for being ahead of its time!) Here is the likeness of the Virgin Mother.

This outdoor statue is a replica; the real statue is inside her house, sheltered from the elements. You might hear Catholic nuns praying the rosary as they walk past you toward the humble abode where Mary is believed to have lived in the latter part of her life; you might also walk past a group of Muslim men reciting prayers in an alcove. Meryemana Evi, House of Mary, is a pilgrimage site for more than a solitary religion; different faiths are brought together in this one place, with many believing in the mother of their god.

The house itself is humble in design and modest in size, and the present-day structure is a partial reconstruction. If you look closely for darker brick in the building’s foundation, you see part of the original house. The lighter brick is the reconstruction.

Between Mary, Artemis, the Amazons, St. Paul, St. John (not the Baptist), and Homer, this region of Izmir is starting to sound like it could have been the Los Angeles for historical, mythological, and religious figures. Speaking of Los Angeles, you might suddenly (albeit fleetingly) taste stardom when you find yourself walking a runway in a more modern part of the city. What am I talking about? This. Beg your pardon, I suddenly veered off into an entirely different (and slightly embarrassing) ramble; but such moments must be shared! Here’s to you and many memorable, historical, sharable ramblings. Cheers.

← Ephesus, Turkey: Details of an Ancient City
There Goes My Gallbladder →

2 thoughts on “Ephesus: The Temple of Artemis & The House of Mary”