Rome is a city of hills. One hill affords you sweeping views of the The Eternal City, while another provides archeological insights from the excavations of lavish bath houses. Yet another hill holds secrets of political history, and still another carries the fables of the city’s foundations.

Among Rome’s Seven Hills, we find Aventino – Aventine Hill. If you’re into foreign films and subtitles, you might recognize its water fountain or Giardino degli Aranci (Garden of Oranges) from “La Grande Bellezza.” The hill is home to Santa Sabina, Rome’s oldest Basilica, and the Villa del Priorato di Malta, aka Villa Malta.

What’s so special about Villa Malta? Oh, nothing, except maybe its off-the-beaten-path keyhole. Beyond an unassuming wall with unassumingly oversized doors, thrives the private garden of the Cavalieri di Malta (Knights of Malta). Believe it or not, you’re looking at a sovereign nation once you peep through this keyhole. The Gran Priorato di Roma dell’Ordine di Malta (the autonomous property of the Knights of Malta) features a garden, church, and villa. That’s it. And while its piazza is small, its view is grand.

The garden behind the wall is rarely open to outsiders; the keyhole, however, is publicly accessible. And through the keyhole, we find well-groomed greenery lining a path with a direct view to yet another sovereignty: Stato della Città del Vaticano – more commonly known as Vatican City.

When your eyes focus on the recognizable dome of Basilica Papale di San Pietro, or St. Peter’s Basilica, you’re now looking across three (three!) nations: that which lies within the gates of Villa Malta, your geographic location of Rome, and the Vatican. Care to look again? 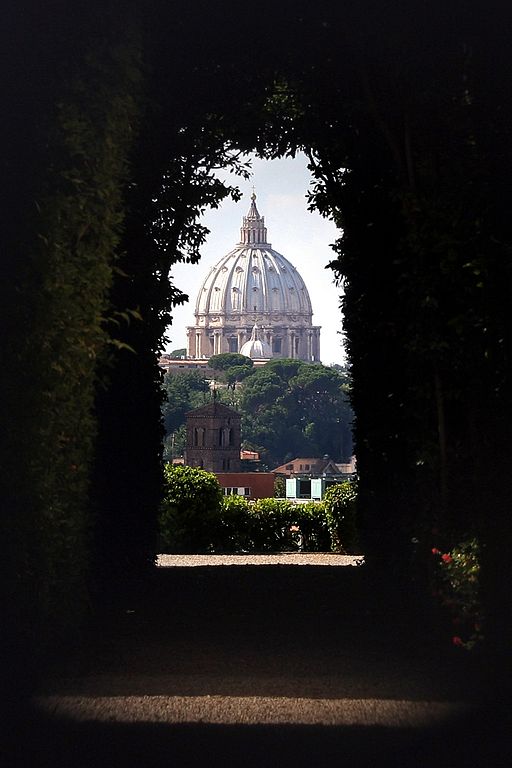 By AngMoKio, via Wikimedia Commons

The Knights of Malta sure know how to pick prime real estate. You could join the Order of Malta for a view from within the gates, or you could just stroll over to the orange grove next door. (It’s open from sunrise to sunset if you’re a fan of panoramic views; and let’s be real, that’s pretty much everyone.) Other spots with great views of Roma? The Duomo of St. Peter’s, the Pincio at Villa Borghese, atop Gianicolo, or the rooftop of Il Vittoriano. Rome is widely known as a city of history and culture; if you know where to look, it’s also a city of breathtaking views, little-known fascinations, and endless points of interest for the curious.