Have you ever heard that familiarity breeds liking? It’s normally in reference to interpersonal relations, but I think it could be said of most anything, including places. Lima is one of those cities that you like more as you get better acquainted. The more of Lima I see, the more I like it: its neighborhoods are alternately colorful and loud, subtle and poised, relaxed and artsy. Since we can’t see them all today, let’s focus on a few highlights of Lima’s historic center (a UNESCO World Heritage Site) and the not-so-nearby, but popular, Miraflores district.

Honestly, if you show me just this photo, my first guess of this locale wouldn’t be Lima – or even South America. But it is! Because then you walk down the street to see these exotic flavors of gelato –including the requisite Pisco Sour– and it feels more like Peru.

Wait, you say, didn’t I just mention Plaza de Armas in another recent post…about another city? Why, yes, I did. Fun Fact: The name “Plaza de Armas” was given to many main squares in Latin America. For example, there are several of them spread out over Peru alone. There’s also a Plaza de Armas in neighboring Chile, Guatemala, Mexico, Cuba, far-off Philippines (once a Spanish colony), the list goes on.

But let’s bring it back. What can you see around Lima’s Plaza de Armas? Most prominently, you’ll notice the Basilica Cathedral of Lima and the Government Palace.

Peace – what the world needs

The plaza is also bordered by a surprising number of other “palaces” that are much more discreet. More interestingly, in a corner between the Government Palace and the cathedral, we find yourself the Museo del Pisco and the ChocoMuseo. Both are fun, but the lure of chocolate wins. And there, we have these fun cuties.

Speaking of sweet and yummy, there’s a Suspiro de Limeña in the Huaca Pucllana Restaurant that makes you wax poetic. Honestly, you might come to Huaca Pucllana for the restaurant and not the ruins…at least, according to my travel companions. But while we’re on the subject, and because I love ruins (which you already know), I should mention that you don’t need to travel far outside the city to see them. In fact, you don’t even have to leave Miraflores (there’s a good chance you’ll be staying in this district when in Lima); a short walk will bring you to the active archaeological site of Huaca Pucllana. Bonus: If you opt to eat at the restaurant (and you should), you can dine with a view of the ruins…lit up at night…oh, hey.

There countless other good restaurants in Miraflores. For instance, you could do La Mora for breakfast, Dolce Capriccio for lunch, and Sophie for dinner.

Lima is a known foodie haven. If you’re a foodie, you make like it simply because of that, or you may fall in flavor-love with every new restaurant. Oh, is it snack time already? Let’s throw some fruits into the mix. These are definitely not available at any of my hometown grocery stores.

But we need to burn off some calories, so let’s walk over to the Parque del Amor – literally, the Love Park (where you will, fittingly, see many lovers displaying various forms of affection).

From certain angles, you might almost blink yourself to Parc Güell in Barcelona. 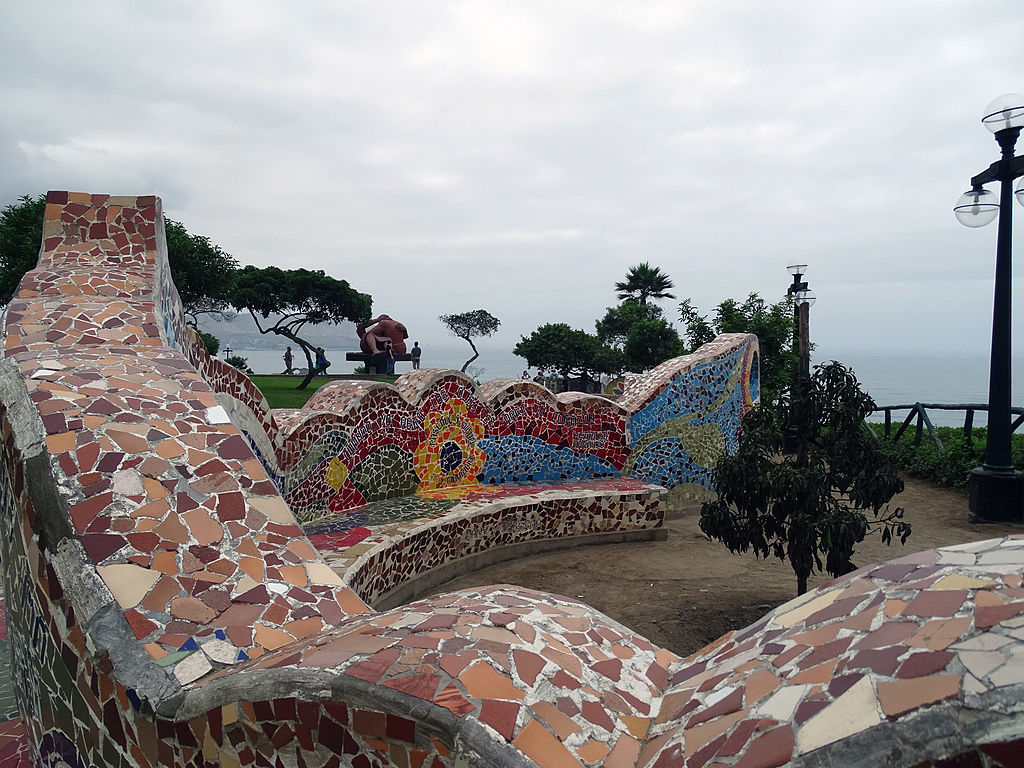 And just to get more steps in, we can walk along the waterfront until we get to Larcomar.

P.S. If you’re curious, you can read more on my thoughts on the locales I mention here.