Anthony Bourdain will tell you this: Head to Mercado Municipal first and have a mortadella sandwich. Or, at least, he’ll tell the camera on an episode of “The Layover.” Which is exactly why we’re here: on layover.

So. How much fun can you fit into 13 hours between landing and takeoff? Let’s do the math – landed at 5:55am; departing at 7:10pm; 45-minute drive into the city on a Saturday morning with little traffic…oh, I can’t math. Let’s be spontaneous! Well. Mostly spontaneous. Remember, we’ll have to manage our time against São Paulo traffic, airport security, and weather. (Warning: Reconsider leaving GRU, the main international airport, if it’s raining, as the road to and from the city is along a waterway…that floods.) True to the city’s local name, Terra da Garoa (Land of Drizzle), the gray skies disappear and reappear unpredictably, causing me to wonder whether it’s possible to plan around the weather.

But no matter! There’s so much color in São Paulo, particularly in Beco do Batman, that you’d want to explore it in gray or shine.

The beco is in Vila Madalena, or Vila Madá, an artsy-craftsy-foodie-party kind of neighborhood. You’ll find cafés open early for breakfast (açai break!), but most businesses open closer to midday. São Paulo natives who don’t live in the area might tell you that all you’ll find at 9am is drunks stumbling home from partying too hard the night before (this district has a vibrant night scene), but Vila Madalena is filled with boutiques, restaurants, and art for those who venture out in daylight.

Also filled with shops and –really good– restaurants is Paulista Avenue, the heart of São Paulo, in the city’s financial district. You could easily spend an entire day here, so we’re just driving through today. 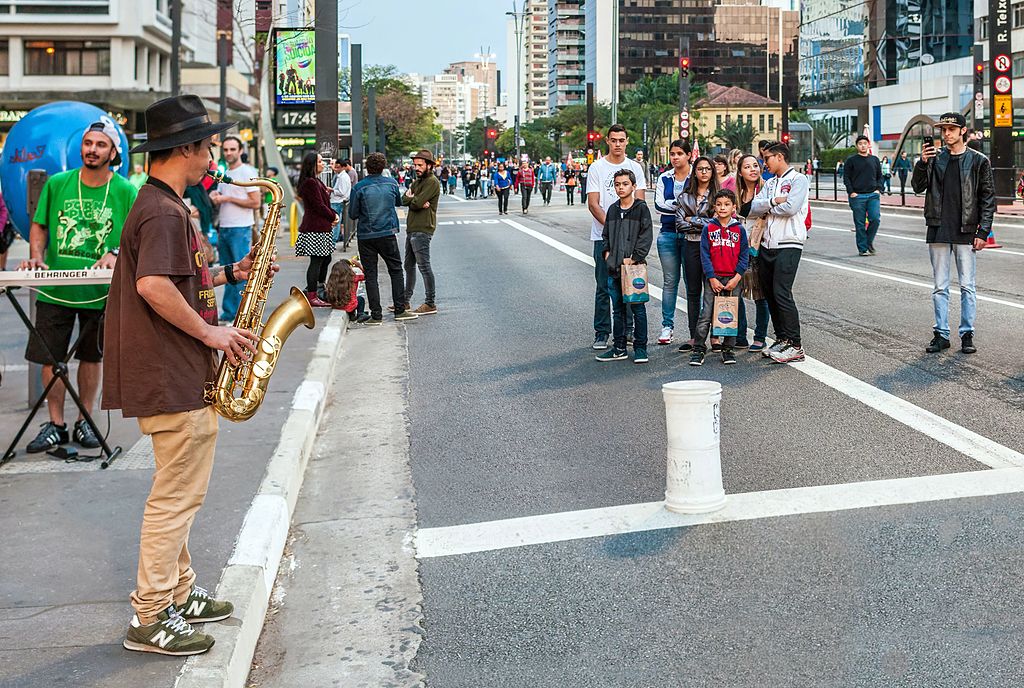 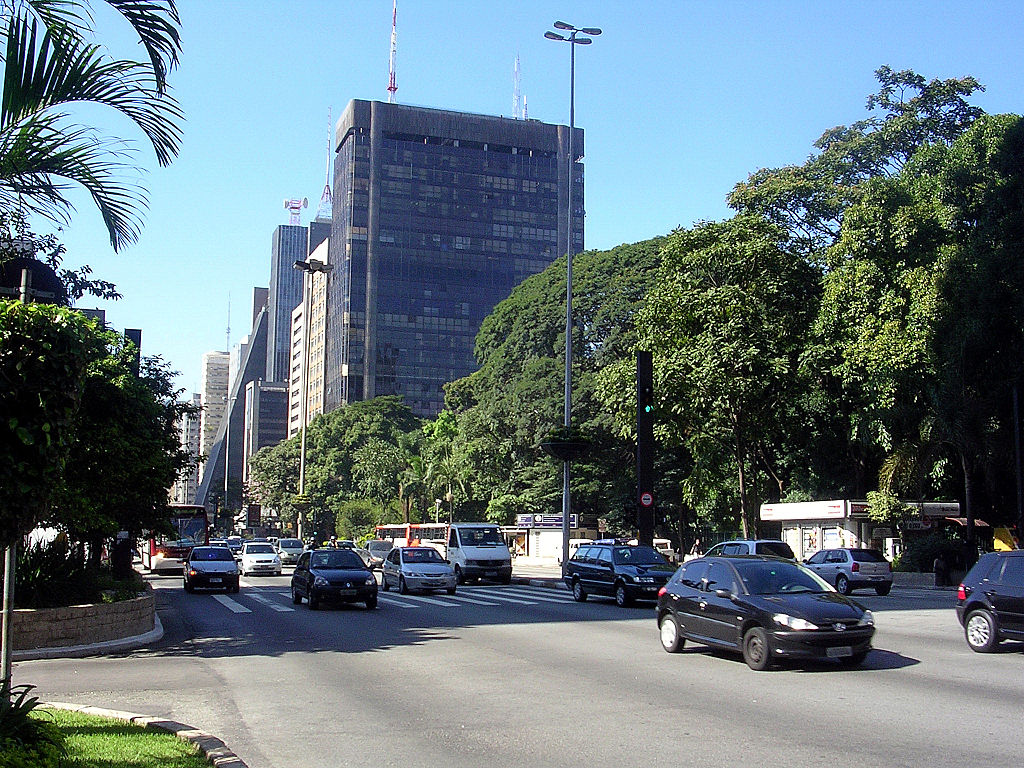 Then there’s Parque Ibirapuera. How do I describe the park in 10 seconds? Huge. People-watching. Lots of runners, walkers, families. Sculptures. Art galleries. Green, duh. Skaters. Ponds. Food carts. Ok, I think I hit 12 seconds. Whether or not you’re a park person, you might find it interesting just to take a short stroll. 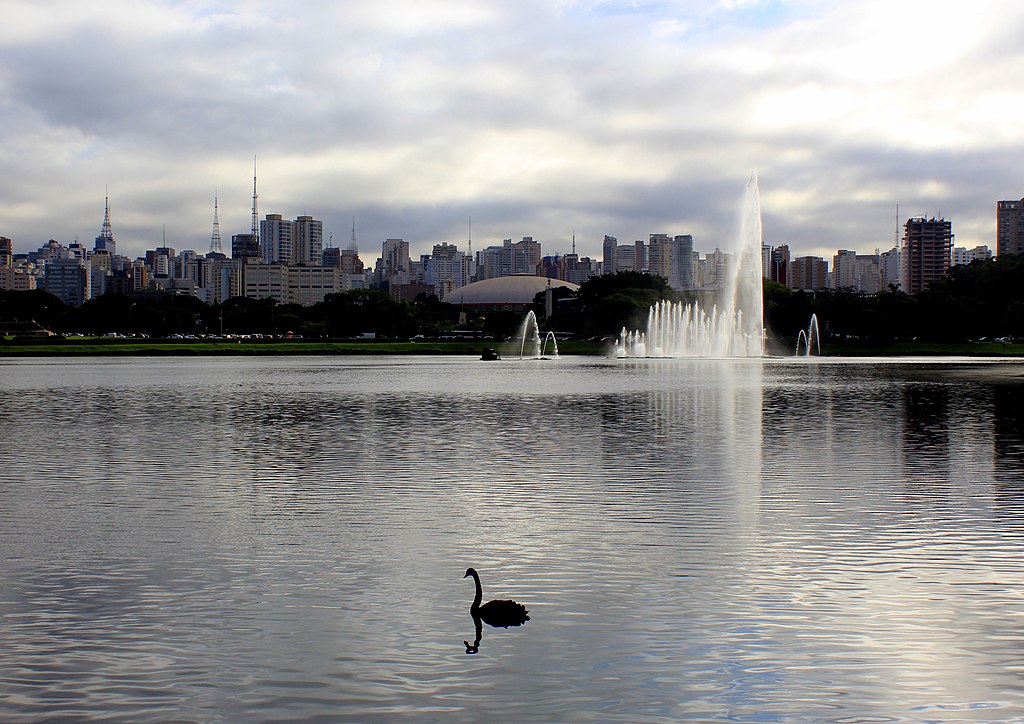 We all know Brazilians love their futebol (try pronouncing it as fooch-bow), but since the stadium Morumbi (officially Estádio Cícero Pompeu de Toledo) is out of the way, we instead drop by Estádio do Pacaembu (officially Estádio Municipal Paulo Machado de Carvalho) and morning soccer practice. Hey, there’s a Museu do Futebol here! If only we had more time, I’d ask if we could squeeze in a museum tour.

Are you hungry? We now come back to the recommendation of Anthony Bourdain. Mercado Municipal – a treasure trove of fresh produce, indulgent eateries, enticing aromas, Brazilian goods…boisterous crowds, relentless hawkers, frenzied chaos. All part of the experience. My friend Caio, a Paulistano himself, agrees with Bourdain. In fact, Caio took his now-wife to the central market on their first date a decade ago; she enjoyed it so much that she requested they return for the mortadella sandwich on a near-weekly basis.

In trying to convince another friend, Juan, who’s exploring the city with me, that we should have lunch at the central market, I relay Caio’s story. Juan’s takeaway is: “So you are saying that you get married if you go to the mercado on your first date.” Juan is joking, of course, but it’s always interesting to hear how people interpret what you tell them across languages. Amidst our Portuñolish (Portugues + Español + English), getting lost in translation is a frequent form of amusement.

With so much deliciousness around, how could you choose? Feijoada (say “Faye’s shwada” really fast) is a natural choice, being that we’re in Brazil and it’s the country’s national dish. If you order this, be sure to bring your appetite; Brazilians don’t mess around when it comes to feijoada. And caipirinhas. Gotta love the Brazilian national cocktail, which we naturally also order.

Need a moment to let your food digest? Let’s stroll the colorful fruit stands downstairs. If I were to magically teleport into this unknown place, based on the selection of frutas alone, it would be quite evident I wasn’t in California anymore.

And that, sadly, concludes our day. You never be too certain about the drive to GRU or the line through security, and you probably don’t want to miss your flight out…. Well, you might want to, but you know you can’t. Perhaps next time, during a longer stay, we’ll get to a sambinha (hit play below). São Paulo, até logo.